SLS - a nasty chemical to know more about since you encounter it every day!

'SLS for short' - or SodiumLauryl Sulfate for long. If you have the suspicion washing your face is making your skin dry, or that shampooing is giving you an itchy scalp or making your eyes sting, or that cleaning your teeth is giving you mouth ulcers, SLS is the likely cause. Read this article on the ten top reasons to avoid using it and you will find it a bit scary. The most scary reason is that, whatever it's in, it helps other chemicals to penetrate your tissue; SLS is a penetration enhancer, meaning that its molecules are so small they’re able to cross the membranes of your body’s cells. Once cells are compromised, they become more vulnerable to other toxic chemicals that may be with the SLS.
Are you using it? Well not unless you use soaps, shampoos, toothpaste, detergents, mascara, mouthwash... the lists goes on.
Why am I bothering to write up on it? Because this knowledge might help YOU as it did ME! For many decades I have frequently had bad ulcers on the sides of my tongue. Even when they were not making it painful to eat they were sitting there dormant, waitint to pounce. Then I read an article, did some reasearch, read the article I linked above, and then went down to Tesco to look at all their toothpaste and shampoos for the dreaded ingredient. I had come to the conclusion I wanted to try a toothpaste without SLS in case that was the cause of my tongue (and mouth) ulcers. The results of that were amazing. The only toothpaste I found without SLS was a range from Sensodyne; I now use their ProNamel. And guess what! Within a week my dormant tongue ulcers had gone! After decades of haunting me! Gone! Point proven?
And if you would like to use a shampoo without it in (given it can permeate eyes, brain, heart and liver), then you might want to change from the usual ranges. Go for a kid's shampoo? Good try, but after checking every shampoo in the store I found it was in them all but one: yes products for adults AND children AND babies. The ONLY one I found without SLS was in a brown, pear-shaped bottle, callled Macadamia Oil by OGX Beauty Ltd (UK). (And it's nice  to use!)
So that's why I am going off-piste to tell you about SLS. Maybe, just maybe, this knowledge will help turn around someone else's health for the better.
Posted by Ian Kingsley at 22:45 No comments:

If you can make your reader know how a character might react in a sitatuation they're real! 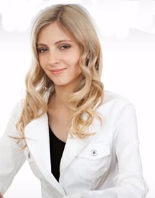 Jennifer Lloyd - known as 'Jen' to her special friends, is the lead character in my new novel: 'The Grave Concerns of Jennifer Lloyd'.

Readers will really be able to get into her head because she is both protagonist and first-person narrator. And she's a very strong 25 year-old with fierce ambitions to set aside a troubled past - which included sexual abuse in a children's home - and make a name for herself in her new career as a television presenter.

Jen takes risks, and one of them was to say she had a Masters Degree in Ecology on a CV seen by her primary source of income: the British Broadcasting Corporation (BBC). She fears that if they discover this her career will be over. So she has a plan. Make herself famous and they won't want to lose her. And that plan? To unmask a murderer: LIVE on-camera! 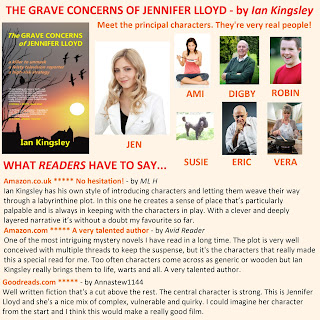 Jen is just one of a number of very real characters, and this image is one I use on Twitter to introduce them - and to take people to the page on my website which gives you far more detail.

I believe in strong characterisation, and I will tell you more about Jen herself in a future post. But here is a brief rundown on those you can see in this picture.

Ami is Jen's best friend and confidant. She is Chinese and shared a room with Jen in the children's home. They've always been there for each other.

Digby is owner of the Dorset house and gardens attraction called Solent House and Gardens. His wife died under suspicious circumstances with the police believing he was her killer. But lack of evidence got him off. Yet his handman disappeared the same night - and a pet do there also died. Far too many coincidences, and the reason why Jen feels there is a huge story to uncover: one that will make her famous.

Susie is Jen's adored little poodle, Robin is Digby's son, Eric is Jen's boss, and Vera is Digby's housekeeper: very aggressive towards Jen's intrusion in the 'big house'. To find out more about them click here. It will show you how real these characters really are.

Strong characters are needed to engage a reader 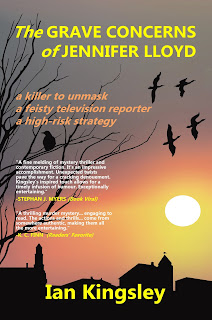 My latest mystery thriller is now available from Amazon, Barnes & Noble and Waterstones. Select your favourite online store here. It is mainly set in the real UK location of Christchurch, near Bournemouth. I've published a couple of walks in the area so you can walk in the footsteps of its protagonist and narrator, Jennifer Lloyd.

It's getting some great reviews so far, so that's a relief - after at least 18 month's work.

BookViral said it is: 'a fine melding of mystery thriller and contemporary fiction'. I agree it is a cross-over in that it offers far more character-depth than an ordinary thriller. That was my aim: to make it a really interesting read. I believe that while plot is the driver of a novel,  strong characterisation is needed to engage a reader - and hence make a novel memorable. The same review also stated it was 'exceptionally entertaining'. Again the aim!

So please check it out on my website to discover why it is already on the 'To Read' lists of over 500 people on Goodreads.

An exciting day today. My upcoming mystery thriller, 'The Grave Concerns of Jennifer Lloyd, has just appeared on Amazon. Fullest details are on Amazon.com but it is also visible on most other sites including Amazon.co.uk. So it shouldn't be many days before you see stock available. The Amazon sites allow you to pre-order. They email you when it is available and only take your cash then. So if you want a copy, get your order in now: and that will expedite them getting in the stock and will mean a quicker delivery.

I can't wait for you to meet Jennifer Lloyd. She's been my preserve for far too long now. A constant companion.

To find out more about this novel, read pre-pub reviews, etc, vist my website at: www.iankingsley.com/books/jennifer-lloyd/.

If you enjoy reading this novel - and I've put a lot of effort into trying to deliver something entertaining and unusual - then please post an Amazon review afterwards. That would not only be very kind - it would be very helpful! I don't have a big publisher behind me - just an Indie - so your endorsement is the best kind of promotion I can hope for. Thank you so much!

When A Character Takes Over!

My third novel, a mystery thriller called The Grave Concerns of Jennifer Lloyd, was the most unusual writing experience I have ever had, and that's after decades of writing one thing or another - and of making a living out of writing. Why?

Firstly, it is first-person, from a woman's pont-of-view (POV). Yes, I have always been comfortable with scenes having female POV - although male is first choice, where this works best. But I have never before had the notion of using a female narrator for an entire book. (Thankfully, a female reviewer of 'Grave Concerns' said I created a 'charming young woman'. So that was a relief. Although, I should say, she is far from charming when push comes to shove!)

But even that wasn't the reason this was my most unusual writing experience. The reason is that Jen -  yes the titular Jennifer Lloyd - came into my mind fully-formed right from the  outset of the story idea. More than that, she virtually dictated the direct manner she wanted to be presented on the page. She comes from a broken background and is short of friends, and she wanted the reader to be her friend: a confidant to whom she can relate, speak, joke.

I could have tamed her, stood back and controlled her, pushed her around via third-person, but it is a real gift when a character comes to the fore like this, so I went with it. It proved to be a delightful experience, and it led to a great depth of  character.

Normally a novelist gets to know their characters gradually, as a novel progresses, so this really was unusual. My first (failed) attempts at writing novels when I was a teenager were beset by cardboard characters. I was plagued by not knowing how to make them seem real. In those days it seemed as if Sherlock Holmes' style observations - characteristations of a man with a limp, poor eyesight, and worse - were the things which distinguished character, but how wrong I was. I now know that it is their psyche which characterises them: how they think, what the want, what has moulded them...

I now like to allow my readers to peep into their heads to understand what makes them tick - or, at least, figure it out from their behaviour and dialogue. I believe each novel has taught me a little more about achieving this, and 'Grave Concerns', and the deep knowledge I had of its protagonist, feels like an achievement because of the intimiate involvement I had with its lead character.

When you boil it all down, you could say its all due to experience. But I think it's something more than that. It is a case of understanding how to understand (your characters)!

Ian Kingsley
I am a writer... and thinker. My most regular social media output is focused on Twitter where you can find me as @authorkingsley. I tweet most days and will link to my blogs when there is a new post. At the last count I had over 36,000 Twitter followers. If you don't have a Twitter account you can still read my latest tweets on the home page of my author website: iankingsley.com. This site also contains information about my latest fiction and non-fiction books. Please feel free to post on my blog. If you want to contact me directly then you will find details on my website at iankingsley.com. Welcome to my blog!